Residents channelling their own flood plans

I’ve been contacted by an old friend – Doug Myers – with concerns about the proposed River Thames Scheme to reduce flooding risks. 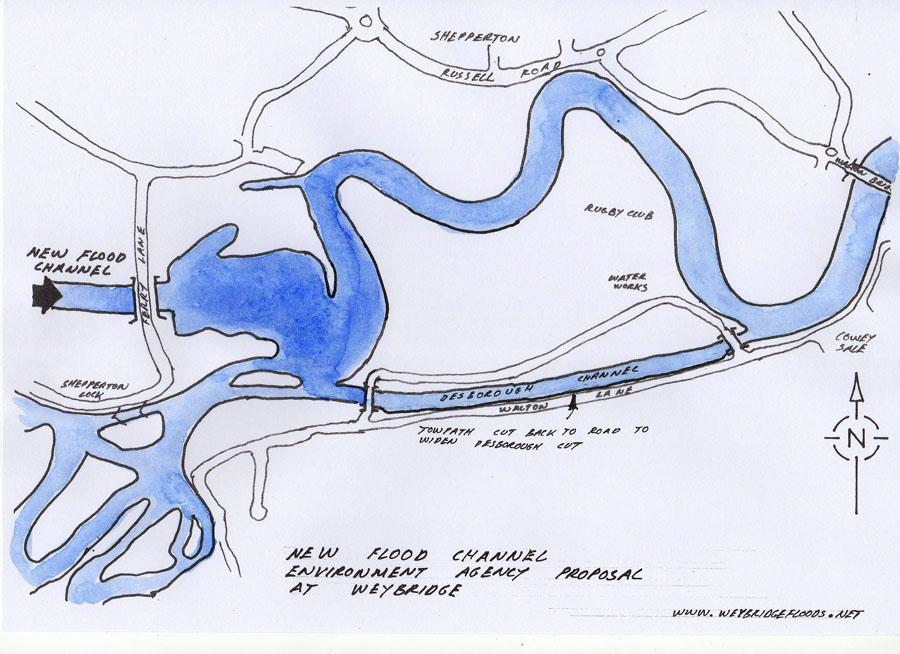 Doug Myers produced this map showing where the flood alleviation channel will empty into the Thames just downstream of Shepperton Lock.

I’VE been contacted by an old friend – Doug Myers from Weybridge, the retired architect who undertook to produce paintings of every bridge on the Thames over a 10-year period – with concerns about the proposed River Thames Scheme to reduce flooding risks.

Doug says: “Locals attended a meeting at St James Church Hall recently to hear details of the flood alleviation plans and were alarmed when they realised that the proposed alleviation channel carrying water from above Chertsey was due to terminate virtually on our doorstep.

“Residents are also upset at the proposed cutting back of the southerly towpath to widen the Desborough Cut to accommodate the extra volume of water.”

Doug went on to point out that in the dreadful floods at the beginning of this year, much of the inundation occurred because the narrow width of the Desborough Island bridges at just 24.5m caused the water to back up and overflow – yet there is no plan to increase the width of the bridges in line with widening the channel – so the likelihood is that the same thing would happen again.

Following the meeting, a local residents’ website called www.weybridgefloods.net was set up to allow people to make their views known.

And it contains one item I found particularly interesting – namely the possibility of cutting another floodwater diversion channel right through the centre of Desborough Island that would emerge close to the waterworks.

I wonder what the Environment Agency’s thoughts are on that idea?

I RECEIVED an email from regular reader, Geoff Voller, who grew up in Isleworth from 1935 to 1956, especially the waterfront and island.

Geoff wrote to me: “After the Dunkirk evacuation in 1940, there was one of the ‘War Savings Weeks’ and one of the boats that took part (complete with bullet holes) was moored at the ferry landing near to the London Apprentice pub and people could go on board to look over it for a donation. (I was 10 years old at the time).

“I do not remember the name of the boat and although I’ve seen many photos of the Thames contingent of Dunkirk Little Ships have not identified this raft. Could you help me please?”

That was the first I’d heard about this incident and I suggested that Geoff contact the Association of Dunkirk Little Ships to see whether they could help.

But it occurs to me that there may be other readers of Riverwatch who might just remember this – if so, do contact me and let me know which of those amazing little boats was involved.

THAMES21 are organising one of their last clean-ups of the year on December 7 at Sunbury Lock Ait. It will take place between 10am and 1pm and the charity is looking for more volunteers to help clean up litter and cut back vegetation.

All you need to do is turn up ready to get stuck in! Meet at the footbridge by the lock house, (KT12 2JE)