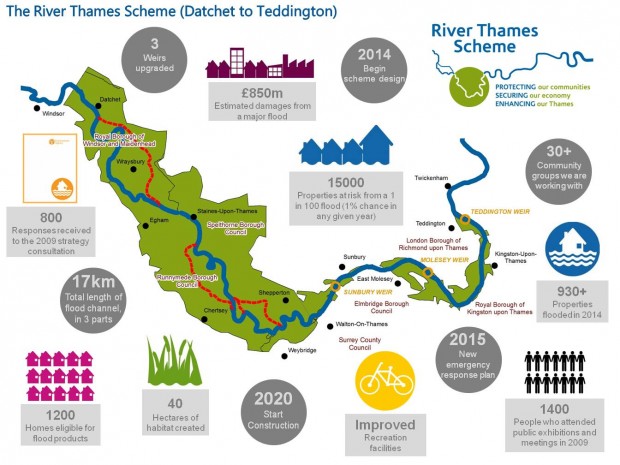 In the year 2025: The flood defence plan in numbers, but it won’t be fully in place for more than a decade.

NOBODY who experienced the flooding that affected parts of our area between Christmas and mid-February will ever forget the devastating impact of water swirling through their home or business.

Understandably, people have been urging the authorities to tell the, what the are going to do to prevent a recurrence.
At a meeting of the River Users’ Group 8 a couple of weeks ago, I listened to a gentleman called David Murphy, from the Environment Agency, outlining the River Thames Scheme.

This sets out what works should be carried out to address the problem – but it came with a sting in the tail.

In summary, the scheme proposes a number of measures including:

The combined cost of these plans will be £256 million at today’s prices but – and here comes the sting in the tail – the government will only provide £136m, leaving £120m to be raised from third parties, including local councils, businesses, home owners et al.

Unsurprisingly, Mr Murphy’s outline of the scheme did not go down well with many of the people at the RUG8 meeting.

Leaving aside the vexed question of how the scheme will be funded, many listeners were stunned to discover that, effectively, it would not be until 2025 that the whole thing would be completed, leaving them at risk of further floods should we experience similar high levels of protracted rainfall in future years.

To be fair to Mr Murphy, he pointed out that the chance of further flooding was quite high – partly because of continuing climate change.

Another major concern was that Staines – which suffered so badly – appears to have been left to its own device because of the lack of a flood diversion channel.

According to the Environment Agency, the proposed flood channels below Staines, coupled with the widening of Desborough Cut, will ‘draw’ flood waters past the town more quickly and thus protect it.

That’s what the computer models predict at any rate.

Interestingly, the Environment Agency plan predicts that the cost of dealing with the fallout from another major flood in our area would be in the order of £850m and that as many as 15,000 homes could be inundated.

Which leads me to pose this question – why is the government only prepared to put up £136m?

It seems that spending in excess of £56 billion on the construction of the HS2 rail link between London and Birmingham to benefit a relatively small number of people who want to be in the second city 15 minutes earlier is a justifiable expense but protecting thousands of citizens from rising flood water is not.

Somebody explain the morals of this to me please…