/ History / From a mystery tunnel to dredging the Thames

From a mystery tunnel to dredging the Thames

Last week, I told the story about Doug Millsom and his friends who, as youngsters, used to play around a tunnel that emerged on the bank of Desborough Island and asked whether any readers knew its history. 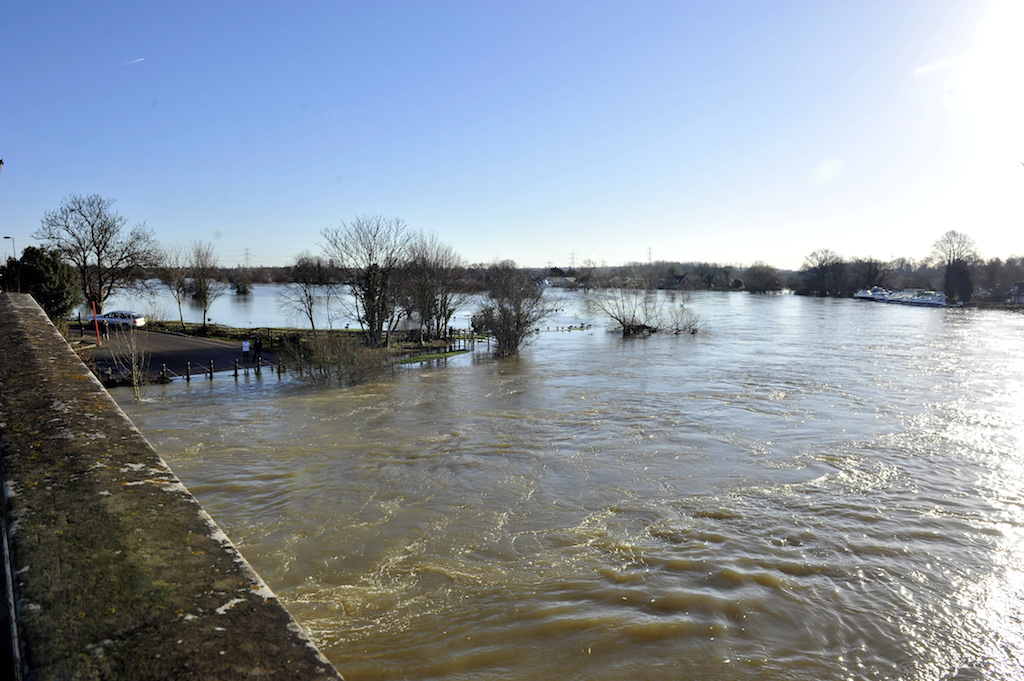 How much longer will this go on? The Thames at Chertsey covering Dumsey Meadow.

LAST week, I told the story about Doug Millsom and his friends who, as youngsters, used to play around a tunnel that emerged on the bank of Desborough Island and asked whether any readers knew its history.

Michael Cobbett wrote to me to say that he, too, remembered it.

He said: “As a boy during the war, we used to play in that tunnel.

“The top end of It was used as an air raid shelter in the garden of a house at the end of Old Palace Road, Weybridge.

“It used to run from the Oatlands Park Hotel – the top of it was exposed in the grotto.”

Michael says he was told that it was originally constructed as an escape route from Oatlands Palace to the abbey in Chertsey, passing under Broadwater Lake and that it was built in the time of Henry VIII – presumably on the basis that whoever was in residence at the Palace might need to make a hasty and clandestine escape if the wrong people came a-calling.

Michael says he doesn’t know how true the story is – but it certainly accords with what Doug Millsom told me so it may well have more than a grain of truth in it.

Thanks for sharing that Michael.

AND speaking of Mr Millsom, his assertion that fishermen were being squeezed off the river brought down a storm of protest on my head. Several readers contacted me to say that I was completely wrong and that fishing rights on the Thames remained unchanged. One gentleman pointed out that, indeed, they were enshrined in no less a document that the Magna Carta as an inalienable right in perpetuity provided a person could actually get to the riverbank (i.e: not by going onto privately-owned land.)

FANTASTIC news for the Queen Mary Sailing Club Sailability project at the reservoir in Ashford, which has won a £10,000 award from Sport England under the ‘Get Equipped’ scheme.

The cash will be used to increase access to sailing for the disabled and is a wonderful boost for the organisation, which has already done so much to encourage disabled people to try the sport in safe surroundings.

AS the horrendous weather continues to batter us and more and more houses are threatened by rising floodwater, I received an interesting email from a lady who wishes to remain anonymous.

She says: “I read your piece in the Herald regarding dredging the river, and you are quite right – it would allow more water in the Thames.

“My husband has worked on the River Thames for 40 years and since the Environment Agency has taken over responsibility, they have not dredged for at least 15 years. When this was pointed out at a meeting, the people at the top said it will ‘self clean’ but they do not know what they are talking about.

“Yes, they do have a responsibility to people and boat owners, but what is the point in paying for a boat licence when they will soon not be able to use their craft because it will hit the bottom every time?

“This issue of dredging must be taken up with the Environment Agency some how and they are not doing their job in preventing flooding if they do not start at the beginning by regular dredging.”

Thanks for that contribution to the debate and I do agree. Dredging will not be a solution on its own – but it must surely help to reduce the risk of flooding, and to allow floodwater to drain back into the river more quickly when it does overtop the banks.