Well, it seems I must be one of the few people who hadn’t heard the stories about prize-fighting taking place in Shepperton! 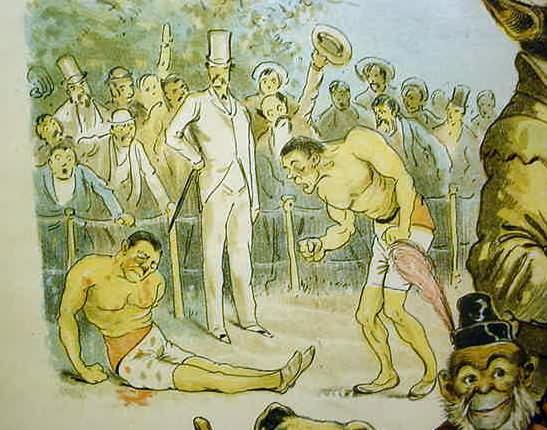 Prize fighting, while illegal, was apparently a regular occurrence in Shepperton

WELL, it seems I must be one of the few people who hadn’t heard the stories about prize-fighting taking place in Shepperton!

Following last week’s article when I revealed that the Royal Thames Guide contained a reference to prize fighting in Church Square, I’ve been deluged with readers telling me they’d heard about it.

I’m grateful to Peter Bailey from the Sunbury and Shepperton Local History Society who has written a couple of articles about the bouts of pugilism that regularly took place during the 18th and early 19th centuries.

Peter’s view is that bouts that took place in Church Square were probably those involving local amateurs – held for the amusement of the rich nobility who stayed at the Anchor Inn.

But the big fights which involved top men from all over the country, are more likely to have taken place on Shepperton Ranges – down Ferry Lane towards where Nauticalia now sits.

Why Shepperton? Well, bare knuckle prize fighting was illegal and those organising the bouts  – known as ‘the Fancy’ – wanted to be able to get away from the area quickly if a magistrate showed up. And one of the quickest ways to achieve that was to jump in a boat on the Middlesex bank and head across to Surrey where they would be safe. Ingenious.

Apparently some of these contests could last anything up to an hour and a half and were very bloody affairs indeed.

Another reader, Graham Dean, says he remembers a painting, which used to hang in the Anchor showing a black man in the ring with a white man – and he believes that it depicted the first ever such bout in the UK. Can anybody else shed any light on that?

Venturer Photography is on the hunt for wildlife or river ecology specialists.  This local enterprise currently arranges photographic training cruises on the River Thames and this summer wants to branch out into cruises with a wildlife theme.

All Venturer Photography activities are run by volunteers and support the work of the charity River Thames Boat Project. Last year, they ran a series of summer evening cruises with a professional photographer on hand to help and guide its photographic clients.  The idea behind the wildlife cruises is to encourage families and friends to come on board, be out on the river at sunset and learn something about the life of the river – and how to look after it.

If you have an academic qualification or work in the area of wildlife or ecology, and might like to help, Venturer Photography would love to hear from you. They can promise a highly enjoyable evening on the river, with refreshments, and an opportunity to convey why our rivers are so special.   Contact Louise on 07985 900 808 or at info [at] venturerphotography.com.

MANY thanks to all those who entered the competition to win tickets to the RYA Volvo Dinghy Show at Alexandra Palace next weekend (March 5/6). Those picked out of the hat and winning two tickets to the show were Sally Dick of Shepperton, Jane Saul of Englefield Green, Paul Elliott of Shepperton, Kevin Walker of Weybridge and Rosemary Bentley of Egham. Your tickets are on their way to you from the RYA.