Hooray, it’s March – and spring is just around the corner. Okay, it’s still blooming cold and that north-east wind is proving incredibly persistent, but at least the hours of daylight are increasing and there are the obvious stirrings all round the garden as nature prepares to share its colourful bounty. 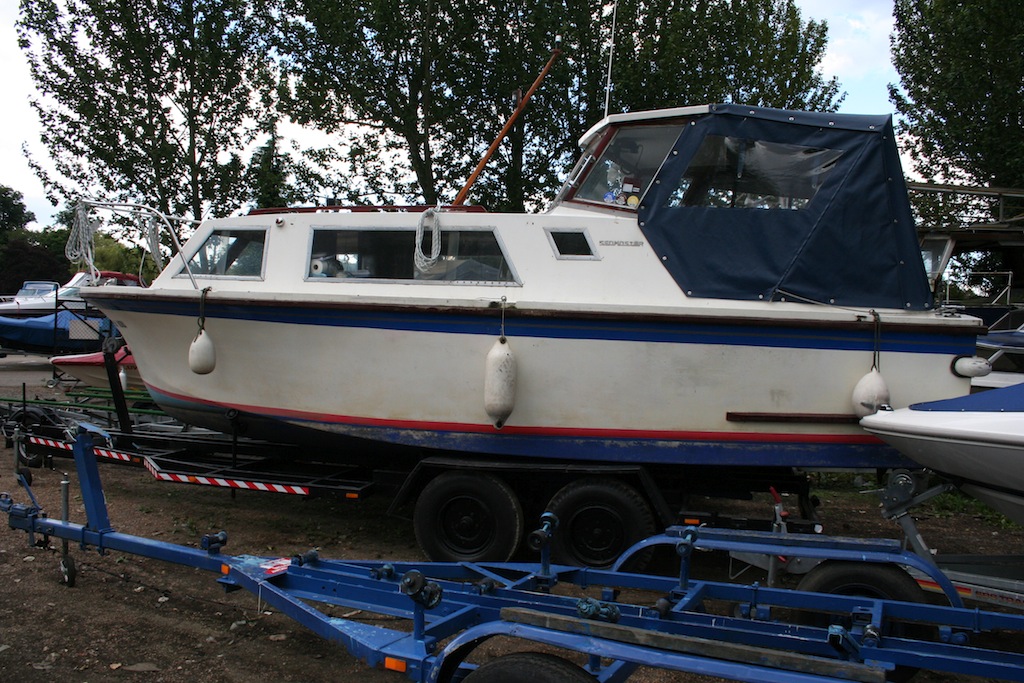 NOT YET READY FOR HER CLOSE UP: Terra Nova looking a little sad and neglected on her trailer – but some TLC and hard work should soon have her ready for action

HOORAY, it’s March – and spring is just around the corner. Okay, it’s still blooming cold and that north-east wind is proving incredibly persistent, but at least the hours of daylight are increasing and there are the obvious stirrings all round the garden as nature prepares to share its colourful bounty.

Which means it’s time to start thinking about preparing the boat to go back into the water.

Now, I have to confess that my brother and I have been less than attentive to our old Seamaster cabin cruiser, Terra Nova, over the winter.

We snugged her down at the tail end of the autumn, made sure she was secure and then, for the past four months or so, have largely ignored the old girl.

Not that she normally gets upset about that kind of behaviour – she just seems to take it in her stride, shrugs her shoulders (should that be decks?) and waits patiently for us wee timorous beasties to emerge from our winter hibernation to start sprucing her up for the new season.

Mind you, I did get something of a shock when I stopped by the boatyard last week.

Terra Nova is hidden away at the back of a whole herd of boats on blocks or trailers, hard up against the fence and under the trees.

She is absolutely filthy, covered in a nice soggy mess of fallen leaves, grimy wood shavings, bits of plastic ripped from boat covers by the wind and a solitary McDonald’s milkshake carton. Very becoming.

And when I climbed into the cockpit via the boarding ladder – well, David Attenborough would have loved it. I’ve never seen such a variety of spiders of all different sizes in my life – I swear they must have sent out invitations to all their friends across southern England telling them that Terra Nova was the ‘des res.’

And evidence that the spider population had been dining well was everywhere – cobwebs covered with insect carcasses were hanging from every conceivable structure – including a beautifully crafted one that covered the majority of Terra Nova’s wheel.

Anyway, a quick set-to with dustpan and brush got rid of the worst of the arachnid excesses and now we can crack on with getting the old girl in shape with, hopefully, her first outing scheduled for some time early in April. Happy days.

I WAS delighted to see the official opening of the new basin at Shepperton Marina last month. I know the marina’s managing director, Rob Marsh, and operations director, Steve Gray, have invested a huge amount of time, effort and money in adding this new basin for moorers, which will increase the marina’s capacity from 227 berths to around 350. The facilities at Shepperton have likewise been upgraded and I wish them every success as they continue to enlarge and enhance their offering to boaters.